In May of this year Pope Francis made public his encyclical on the environment Laudato Si. Since then I have been wanting to share this amazing new document with everyone. Over the next several weeks I will use this space to focus on the various themes of the encyclical using an article gleaned from the website:

An “urgent challenge to protect our common home … to bring the whole human family together to seek a sustainable and integral development, for we know that things can change” [13].

Thus introduces Pope Francis’s plea of Laudato Si, a text of such landmark significance that it may well become one of the most important sources of Catholic Social Teaching since its inception with Pope Leo XIII’s Rerum Novarum in 1891. Both the title of the encyclical (“On Care for Our Common Home”) and its opening quote from St. Francis’s canticle establish the focus of this text.

It’s all about relationships.

In the introductory section, Francis, following his thirteenth-century namesake, calls the earth our “common home”, which is like our sister and our mother. But we are damaging this familial relationship as we harm the environment. In so doing, we are damaging our relationship with other humans, particularly those least equipped to defend themselves: the poor and future generations. We are forgetting our interconnectedness with the earth and with those around and ahead of us who depend on our good stewardship of the gift of creation.

Given the universal nature of our common home, Francis makes it clear that the encyclical is addressed to not only members of the Church but is a vehicle to “enter into dialogue” with all people who are “united by the same concern” [3, 7].

Such a wide target audience explains the immense range of sources the encyclical draws on. The document looks to St. Francis of Assisi and St. Bonaventure, as well as St. Thomas Aquinas, but also to Eastern Christian traditions. It even quotes a Sufi Mystic. Twentieth-century thinkers Teilhard de Chardin and Romano Guardini deserve special mention. 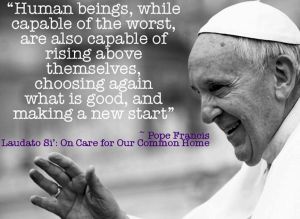 Secular documents such as the Rio Declaration from 1992 and the 2000 Earth Charter are referred to as well. The reader is also struck by the many references to previous papal writings, particularly those of St. John Paul II and Benedict XVI. The relationship between Francis and his predecessors on ecology is strong.

After a comprehensive introduction, the encyclical divides into six chapters, each examining different aspects of the rupture between humans and creation and the prospects for healing this relationship.

Next week we will look at Chapter 1 on What is Happening to Our Common Home.
Download the encyclical and read along: http://w2.vatican.va/