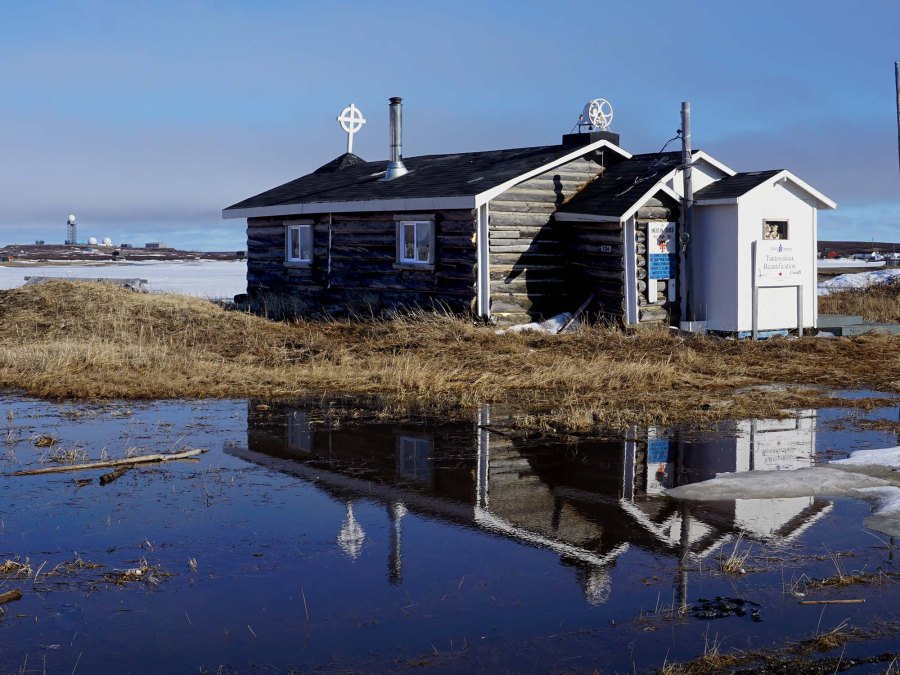 The last of the large snow piles left behind from the clearing of the church parking lot are slowly seeping into the ground, the ice road to Tuktoyaktuk is no more and the ice pans jumbled on the river bank during breakup are almost gone. The sun is now up and will be for the next month, circling the horizon 24 hours.  This makes daytime temperatures quite pleasant though the mercury can still dip down below the freezing mark at night.

As in other parts of the country with spring weather comes gardening but it must be done a little differently up here. The delta offers good fertile soil but the fluctuation in daily temperature makes for a short growing season and outdoor gardening, for the most part, is a dubious prospect. However, inside the Inuvik Community Greenhouse seeds are already sprouting and those who started seedlings indoors back in April will soon see the first blossoms on their tomatoes.

The people of the north were not always vegetable eaters and some still are not.  Country food, as it is known, is still an important part of the diet. In May, the birds returned on their migration routes and the goose hunt was on. The game harvest provides fresh fowl for the table and hopefully a few extra for the freezer for the winter months that lay not so far ahead.

The bounty of nature is immense but while land and sea does provide it is not always predictable and for some it remains inaccessible. Food security is an issue in the north. It costs money to hunt and fish as gas for quad and boat is very expensive and nets, guns and bullets are not free. For those who must purchase food, grocery prices continue to rise as they do across the country, but at an even higher rate.

Locally our parishes and missions respond to the food shortfall with ministries that include services like the Community Kitchen in Inuvik, which offers hospitality and warm food to the homeless and those who struggle financially. Each Saturday and Sunday of the winter the doors open for a simple but nutritious lunch of soup and sandwiches. Occasionally we will celebrate with a feast or a potluck and the simple fare is elevated to the festive as appetites are satisfied with turkey, caribou, char and other delicious food from the land.

Sheila’s paid job is as a counselor at the Aurora College where she provides a listening ear and helpful advice to students from across the western Arctic, some of who have never been outside of their small communities before. Sheila goes above and beyond and exercises great creativity and patience navigating the many interesting situations that arise in her work. One of the more recent being, where to find room and board for a grown Pitbull dog that wasn’t allowed to stay with its owner in the student residence.

Sheila admits that she is a little embarrassed by the award, “I am aware of many other volunteers who do a whole lot: Service groups and many others that I don’t even know about. I wanted to say thank you to all of them.” When asked what motivates her to keep serving her community when she already has a busy life Sheila responds that her primary motivation is her faith, “St. Francis says preach the gospel using words only when necessary.”

May closed with a trip to Tuktoyaktuk. Tuk has had a lot of visits this spring from visiting priests and mission preachers but it has been awhile since I have spent any time there so it was good to reconnect with Sr. Fay and the faith community. On Ascension Sunday, we celebrated 5 baptisms and continued our gathering with a potluck meal after the Mass.

In the evening members of the community gathered to talk about the needs of the mission and we finished by reflecting on the ongoing desire to respond to the Calls to Action of the Truth and Reconciliation commission. One of the action items was for local parishes and missions to aid in collecting information on those who died while attending Residential Schools and where their bodies are located. It was a sombre topic but of concern since many northern cemeteries are no longer cared for and grave markers, where they existed at all, are disappearing.

It was also remembered that as we were sharing memories of those lost during the time of Residential Schools, the National Inquiry into Missing and Murdered Indigenous Woman and Girls was holding the first of its hearings in Whitehorse, YK. The mandate of the Inquiry is to examine and report on the systemic causes of all forms of violence against Indigenous women and girls in Canada by looking at patterns and underlying factors. See http://www.mmiwg-ffada.ca/en/ for more information.

In closing I would like to say thank you to Abbot Peter Novecosky, editor of the Prairie Messenger, a weekly Catholic newspaper. Abbot Peter has invited me to contribute to the publication monthly as way of sharing with a larger readership some of the experiences of life and ministry in a northern community. I am grateful for the chance to raise awareness of the missions in the western Canadian Arctic. You can read the Prairie Messenger online at http://www.prairiemessenger.ca/ .

Until next time, Peace